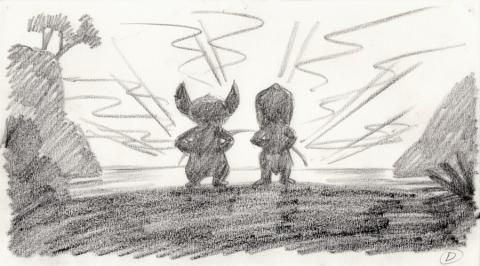 An original storyboard drawing from the Walt Disney Studios animated film Lilo and Stitch (2002). Featuring Lilo and Stitch in front of a sunset, the storyboard drawing was created at the studio by Chris Sanders and used during the development of the film's story. The particular scene that this drawing was being used to develop was not animated for the final film, making the drawing a unique piece of the film's story. Measuring 5.5"x10" overall, and with the image area measuring 5.25"x9.75", the original drawing is in very good condition with pin holes in the corners from studio use.