Highlights from the Disney Parks include a large entrance "Welcome" sign from Disneyland, a wooden sign from a Jungle Cruise boat, silkscreened attraction posters, an original Pirates of the Caribbean concept painting by Marc Davis, an original Sleeping Beauty Castle concept by Eyvind Earle, an original It's a Small World concept by Mary Blair, pre-opening Tomorrowland concept drawings by Herb Ryman, and much more.

Scroll down to browse a digital version of the catalog,
and to order a physical catalog.

Did you miss out on something special in the auction?
Click below and you can purchase other Disney collectibles from our retail gallery!
Disneyland Souvenirs
Disney Animation Artwork 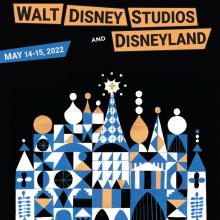