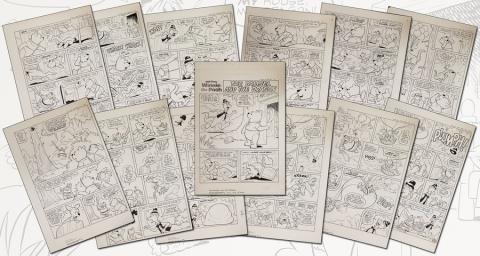 An original comic book story based on the Walt Disney Studios animated character Winnie the Pooh. The thirteen page original story titled The Damsel & the Dragon was published by Gold Key in 1979 as part of the Winnie the Pooh comic book series. Featuring Pooh Bear, Rabbit, and Kanga in an adventure with a knight and a dragon , the (13) pages are accomplished in graphite, ink, and correction fluid on cardstock. Measuring about 21"x14" each, and with the image area measuring about 17.75"x12.25" on each page, the comic art is in very good condition with minor edge wear.