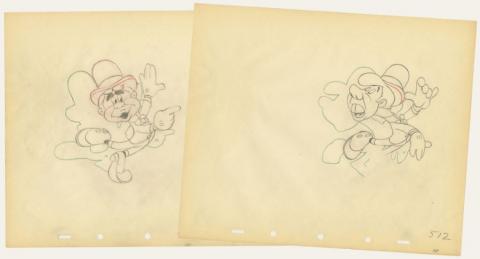 An original set of (2) production drawings from the Walt Disney Studios animated short Nifty Nineties (1941). Featuring caricatures of Disney Legends Ward Kimball and Fred Moore, the drawings were created at the studio by Disney Legend Ward Kimball himself, and used during the animation process. Kimball was one of the Nine Old Men of Walt Disney Studios and was the lead animator to supervise this sequence, with his rough drawing appearing under the clean up drawing. While the two drawings are from the same scene, they are not a key setup and have been paired together for presentation purposes. Each page measures 10"x12", and the image area of each character measures 5"x5". The production drawings are in very good condition with light wrinkling to the paper and minimal edge wear.