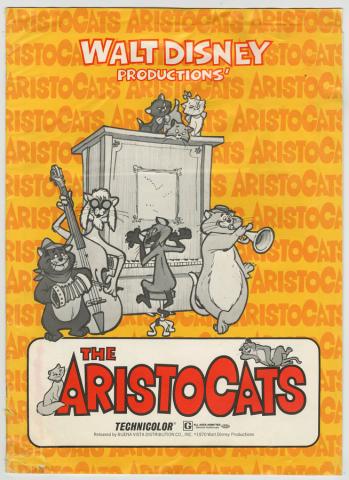 This is an original marketing brochure for the Walt Disney feature film, The Aristocats. Prior to the 1980's, movie posters were produced specifically for theaters and stores to promote the release of films to consumers. An organization called National Screen Service handled the distribution of these promotional materials for the distribution companies, and they would provide theaters with brochures like this. The brochure would have a synopsis of the film for the theater to understand what the film was about, and it would have a variety of promotional materials that could be ordered for display in their theater to promote the release of the film. This brochure also has a variety of pre-written articles for print publications, and order forms for other movie items such as soundtrack records. This brochure measures 15" x 11" and is in fair condition with some wrinkling, creases, small tears and general wear from use throughout. It's usual that when these items do turn up, which isn't often, that they are not in the best condition, as most theater owners would have used them for their purpose and then discarded them or not cared to keep them in cared for condition. This is a lovely and unique item from the original release of the film. The images shown are a sample of the pages.