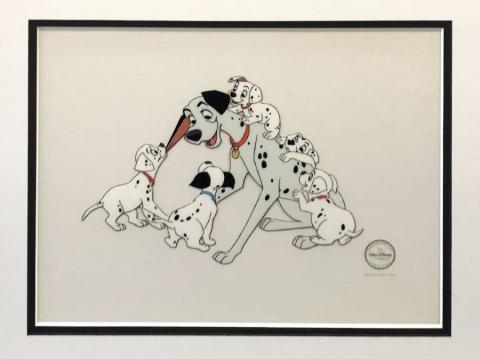 A limited edition sericel featuring imagery inspired by the Walt Disney Studios animated feature film 101 Dalmatians (1961). The sericel was produced in the 1990s in an edition of 5,000 cels, and is titled "Reunited with Pongo." The image features an image of Pongo being reunited with several of his puppies in the barn, where they fled from Cruella De Vil. Measuring 18.25"x21.5" framed, with the character image area measuring 7"x9", the piece is in fine condition with minimal frame wear. The piece has not been examined out of its frame. Also included on the back of the frame is the original certificate of authenticity.