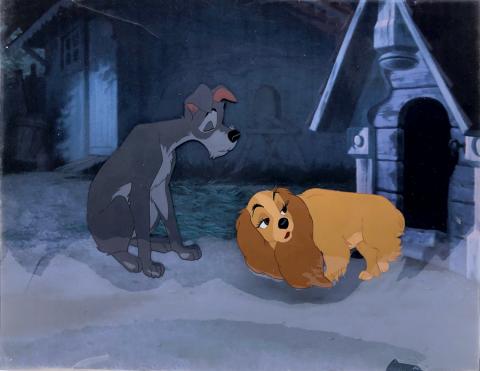 An original production cel setup from the Walt Disney Studios animated film Lady and the Tramp (1955). Featuring two cels that depict Lady and Tramp, the hand-painted cels were created at the studio and used during the animation process. Each cel is an actual frame of animation that was photographed and appears in the movie. The characters are from separate scenes in the film, but they were paired together in this setup by the Disneyland Art Corner. Measuring 9"x11.75" overall and with an image area measuring 4.75"x7.75", the setup is in fine condition with staple holes at the top center of the two trimmed cels from their original Art Corner setup and a tear on the top edge of Tramp's cel. We have paired the setup with a color copy reproduction background.