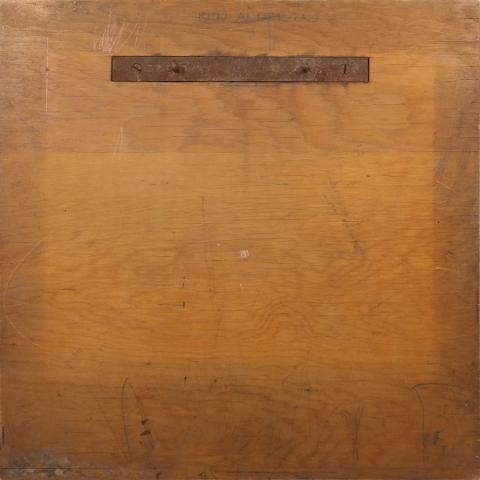 This is an original Walt Disney Studios portable animation and drawing board of the 1930s. The board is made of varnished plywood with two-peg metal animation registration system mounted with two screws, 1.75" from the top. This particular board belonged to and was used by Disney Legend Ken Anderson, who wrote his name in pencil above the peg bar. The pegs match to Disney's system that was in use prior to 1936-37, and the undarkened portion of the board corresponds to the size of Disney's 12-field 10" x 12" or 10.5" x 12.5" animation paper of that period. Mr. Anderson joined The Walt Disney Studios in 1934 and soon became a leading art director and concept artist for its animated shorts and features. He moved to WED Enterprises in the mid-1950s where his architectural talent and training were of immense value in the design of Disneyland and Walt Disney World. (The "Ken Anderson Bait Co." window above Disneyland's Market House dates from the Park's opening day, a tribute to his designs for the Fantasyland dark ride attractions and an inside joke because he was an avid fly fisherman.) He remained active in animation and was credited for Art Direction and Production Design on 101 Dalmatians (1961) and contributed in these capacities to the animated features through Pete's Dragon (1977). He was named a Disney Legend in 1991 for his contributions to Disney animation and Imagineering. "W. D. P." is stenciled in black paint on the back. "Bill Weaver / Hands Off" is carved into the board on the back. William Weaver was an animation and comic artist who worked at a number of studios from the 1940s to the 1960s. He was an assistant animator at Disney around 1940 and also spent some years as a layout artist at Columbia. He finished his career with Disney in the publications department, drawing comic books and newspaper features. Weaver passed away in 1967. The board shows significant signs of expected wear and use, including some pencil markings; light edge wear; and the metal peg system has rusted. Overall it is in very good condition for an animation artifact that was used to such a degree.