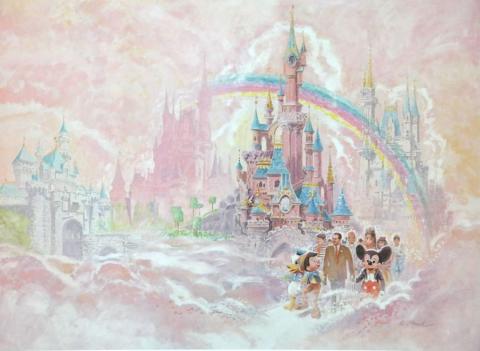 A limited edition print celebrating the 1992 grand opening of Euro Disney Resort. Titled "The Sun Never Sets on the Disney Magic," the image as created by Ed French, who has also signed the print. The imagery features Walt, Mickey, Donald, Pinocchio walking out of the Château de la Belle au Bois Dormant. In the distance there are other Disney castles, paying homage to the park's predecessors. The print numbered in an edition of 5,000, and measures 24" x 32" overall with the image area measuring 21"x28.5". It is in good condition with edge wear, curled edges from being stored rolled, light creasing, and staining near the edges. Also included is the original Certificate of Authenticity.