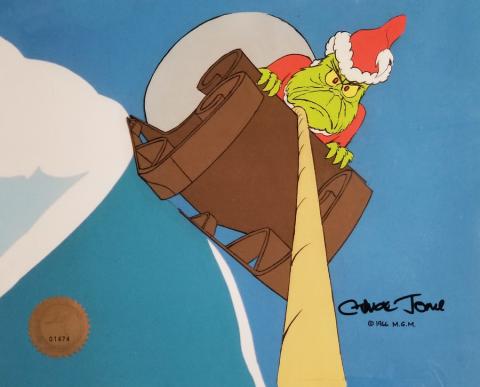 "And the sleigh started down toward the homes, where the Whos lay a-snooze in their town." Max looks up at the Grinch coming over the cliff's edge as he prepares for his descent into Whoville. This is an original production cel from the Chuck Jones/MGM Studios animated Christmas classic, How the Grinch Stole Christmas! (1966). This hand-painted cel features the Grinch on his sleigh. The cel was created at the studio and used during production, representing an actual frame of animation that was photographed and appears in the cartoon about 10:45 into the film. The cel is hand-signed by legendary animator Chuck Jones and is paired with a color printed reproduction of the matching background. The overall measurements of the piece are 18.75" x 20.75" framed with the mat opening measuring 9" x 11" and the image itself measures 8.75" x 6.5". The cel is in very good condition.