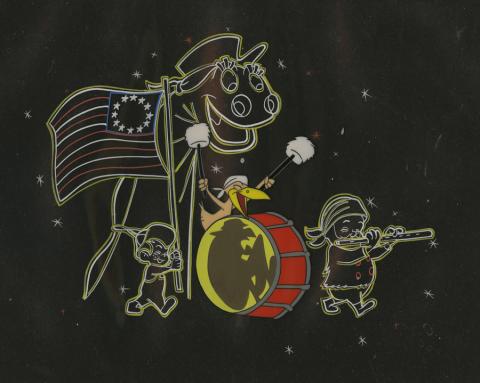 This is an original Production Cel from the Studios production of The Beany and Cecil Show (1959-1962). This hand-painted cel is created with 4 layers and features the main cast of characters, including Beany Boy, Cecil, Captain Horatio Huffenpuff, Crowy, and Dishonest John, and was created at the studio and used during the production of the series. The overall measurements of the slightly trimmed piece are 10" x 12.5" and the image itself measures 6.5" x 8". The four layers consist of one layer for Dishonest John's silhouette in the Drum, Crowy with his drum, the painted outline imagery for Beany, Cecil, and Huffenpuff, and the final one is the stars in the background. The cels are in very good condition and is placed over a piece of black paper to emphasize the mostly white line work painted cels.