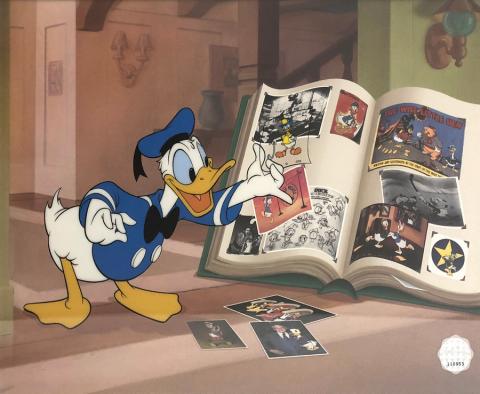 A limited edition sericel creating a unique image of the Walt Disney Studios character Donald Duck (1934-present). The sericel, titled "Donald's Memory Book," features Donald looking at a scrapbook filled with scenes of his past appearances. The design of the sericel was supervised by Tony Anselmo, the voice of Donald Duck since 1985, who also signed the mat and drew the picture of Donald that is screenprinted next to his signature. It comes from an edition of 2,500. Measuring 17.5"x20.5" framed with a mat opening of 10"x13" and an image area of 10"x13", the sericel is in very fine condition, unexamined out of frame.