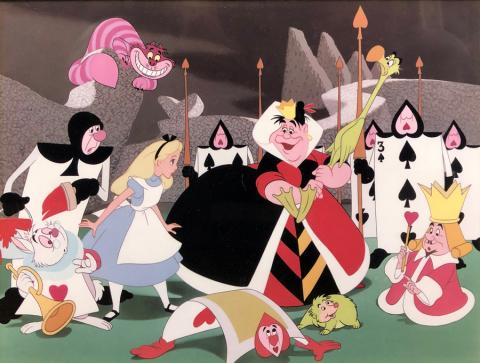 This is a vintage dye transfer print depicting a scene from the Walt Disney Studios animated film Alice in Wonderland (1951). Featuring Alice, the Card Guards, the White Rabbit, the King of Hearts, the Queen of Hearts, and the Cheshire Cat, the print was created by the studio using a dye transfer printing process. The process used pigments with move vivid and longer lasting colors, but the studio moved on from dye transfers after the implimentation of lithography. The overall measurements of the piece are 13"x16" framed with a mat opening of 8.5"x11.5". The print is in very good condition, unexamined out of frame, with a small crease near top right corner that is barely visible in the frame.