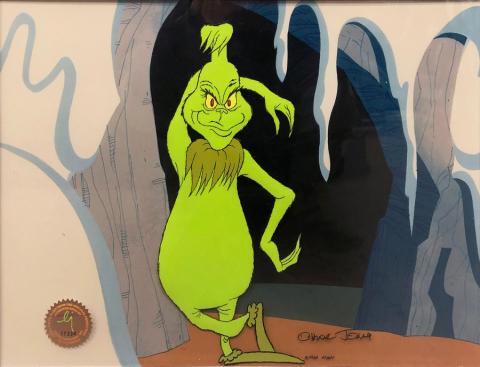 An original production cel from the Chuck Jones Studios animated Christmas classic How the Grinch Stole Christmas! (1966). Featuring Grinch standing in a comically villainous pose, the hand-painted cel was created at the studio and used during the animation process and has been hand-signed by Chuck Jones himself. The piece is an actual frame of animation that was photographed and appears in the movie, which is one of the most beloved holiday films. Measuring 21.5"x25" framed with a mat opening of 11"x15" and the character image area measuring 10"x5", the production cel is in fine condition, unexamined out of frame, with some scratches in the frame and plexiglass. The cel is paired with a color copy reproduction background.